Here's A Brief Thumbnail Of Our Stained Glass Studio 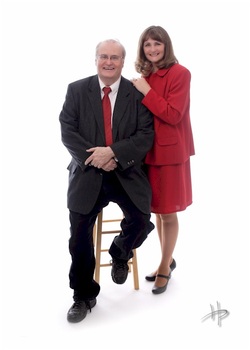 At Gomm Studios, we build and sell custom stained glass, both residential and commercial. This includes beveled panels for furniture, and a line of "quilt block" panels for the seasons. We specialize in design and construction of one of a kind designs. We currently publish 2 YouTube videos each week to teach more about the techniques and philosophies that guide us.

Jeanne (who has written two books of stained glass patterns) creates most of the panels, her sense of color and design makes the glass come to life. David (who has produced ten videos on stained glass crafting) refines the designs and cuts the glass, then we both assemble and install the windows. One of the most public  installations we’ve created is the 100 square foot “Seasons Of Creation” in the North Gallery of the Covey Center For The Arts in Provo, Utah. We have shipped stained glass all over the United States and created panels for businesses that help to define them and act as both signage and art. We participate in about 10 art shows each year so that folks will have the chance to see what's available in stained glass.
Gomm Studios 801-344-0178.
david.gsglass@gmail.com

Recent projects include a front entry inspired by the 1908 work of Greene & Greene (famous for their oriental inspired bungalow architecture), Front door panels and room divider panels for a ski lodge in Park City, Larry Millers' cabin in Idaho, and Keith Bartons' home in Alpine. We also shipped a large sign to the Knob Gallery in Wisconsin and one of the Women of Faith panels to Florida. We created a youtube video of a recent install of "The Dance Of Life." and we installed about 85 square feet in a grand entry in Salt Lake City. Our cherry blossoms panels that were installed in Mapleton are beautiful, here's the link to the video. We also recently completed a mosaic in Springville and you'll love the install video that you can see here

We look forward to building a piece of glass art for you.
Our Beginnings
David took classes from John Foster in Missouri and built his first window of Ed Sibbett's "Gemini Girl" in 1982. Soon after David and Jeanne built a window for her grandmother and a window for some friends in Colorado. Because we enjoyed building windows so much, we decided to venture into the stained glass business. David traded a window with a doctor for part payment on an operation and we both built a window the night before our daughter, Sarah was born.

In April of 1983, we rented a storefront in Pierce City, Missouri. David built two 4 x 8 work tables and put ads in the paper and began building glass commercially and teaching classes. The business, called Dry Valley Studios, grew and expanded and moved during the first year. We noticed that window sales came in spurts, when they were up, the business surged with needed cash flow and then things would slow down again. We rented videos to provide income and grew to three video rental stores.

We were able to sell 10 to 30 commercial windows per week  to a furniture builder which provided a small steady stream of income. David took additional classes in lamp design (Parkies, Springfield, MO) and sandblasted etching (Merry-Go-Round, Springfield, MO). Jeanne began to draw many patterns for customers. We sold the video stores in December of 1984 and then built stained glass part time for several years.

We received a commission to build a stained glass nativity scene for the city of Pierce City in 1984. We drew the first draft of the window in our studios before selling the video stores off. Later work progressed over a period of three years until the project was completed. It took a long time because we donated our labor in the construction of the window. The window was completed before Christmas 1987 and was later rebuilt in 1990 after an accident damaged it.

David taught a stained glass course at Missouri Southern State College in the fall of 1989. We built windows occasionally for the next few years and in 1998 we moved to Idaho where we took the opportunity to work with furniture for two years and incorporated some art glass into furniture.

In October, 2000 we moved to Provo, Utah and set up a studio in our home. We obtained a city license and sales tax number in January, 2001.