We worked the whole year awhile back on planning for the candy windows that the Provo Arts Council sponsors each year at Christmas time. I was in charge of getting a globe for the moon in our display. I thought that would be easy enough, but it wasn't. I finally resorted to building two half round lamp shades and putting them together. 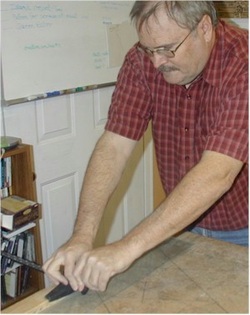 Since the globe is a free form piece with no laid out pattern pieces, I started with strips of glass, cut with a strip cutter. I knew that the final globe would be covered in candy and icing, so I didn't have to worry about the gaps and perfect solder job that most lamp projects require. 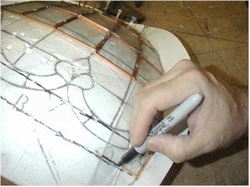 I prepared a "Worden" Styrofoam lamp base by laying tape over it to protect it. I added side pieces to constrain the pieces and I put horseshoe nails along the edge where I wanted the glass pieces to start.


Since the mold was round, I needed to lay strips on the mold and mark where they should probably go. 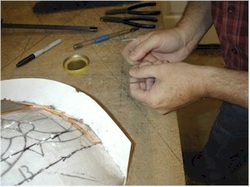 I started at the bottom of the mold and worked my way to the top, marking the glass, foiling it and tacking the pieces together, a row at a time. 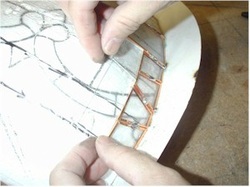 I laid up one row at a time, so they wouldn't fall off. 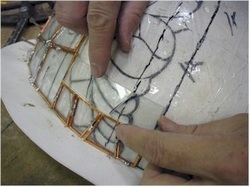 At the same time, I laid up a row of glass on the other side of the mold. 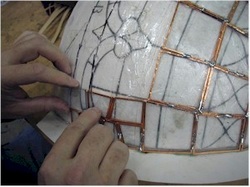 I foiled the row as soon as it was cut out. 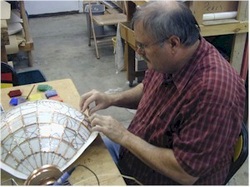 I set the mold on the soldering table and soldered in much the same manner that we always work. 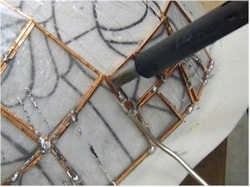 As I tacked the pieces together, gravity worked against me. But I didn't worry about drips at this stage of construction. 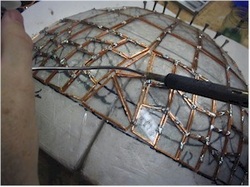 At the top, I selected a bigger piece of glass to fill in the final space. 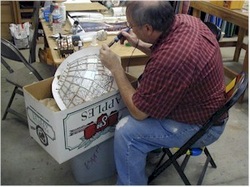 After the panel was tacked, I needed to solder the outside while still on the mold. I placed the mold in a box with crumpled paper to support things. I also used a garbage can to raise the box and the piece up to a comfortable height.


The key to success in soldering 3D pieces is to keep the line you're soldering level. So I rotate the globe with each line I solder so that it is level. This way the melted solder stays in place just like when soldering a flat piece and it doesn't try to run off of the project. 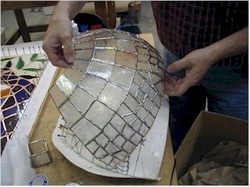 After the outside of the panel was complete, I gently removed it from the mold. 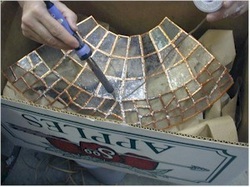 Then I placed the panel into the box full of crumpled newspaper for soldering. It's very important to solder along the most flat line possible, so placing the glass on paper allows me to shift and balance the panel for successful soldering. 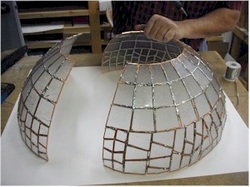 That was easy, then I just had to build five more panels. Once they were done I began to tack the three top panels together. 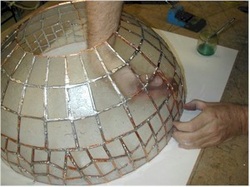 I had to pinch the gaps together. 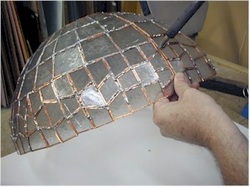 I also had to be careful not to let hot solder drip on me as I held things together. 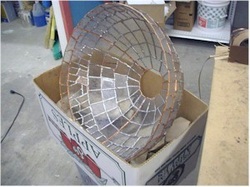 Then, it was back to the box to solder the inside connections. It would be difficult to solder them after the globe was finished. 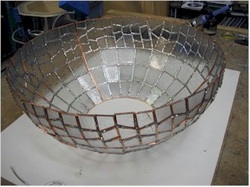 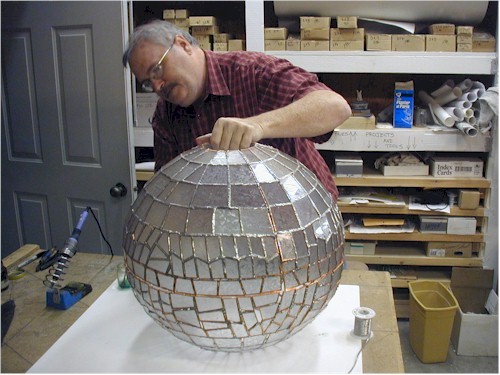 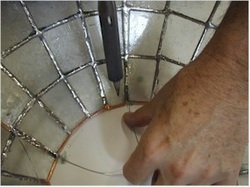 Before I can solder the two halves together, I need to attach the wires which we will hang the globe from. Later I'll solder a rib of copper wire around the opening to add a little more strength so that there will be less stress on the glass as the globe hangs. 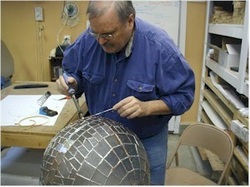 I have to add foil around the gap that runs around the "equator" of the globe. Then I solder around it, sealing the gap. I also solder all the areas that haven't yet been soldered on the outside of the globe. 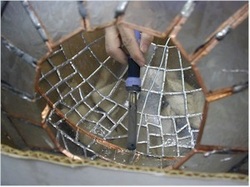 I have to reach a long way to solder on the inside of the globe. After that I add a piece of glass which closes the bottom of the globe and allows for a nice flat surface for the globe to rest as other work is done to it. 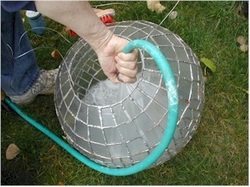 I then cleaned it well with cleanser and brush and hosed it out.
The last thing to do is attach the wires on the completed globe to the ring which it will hang by. 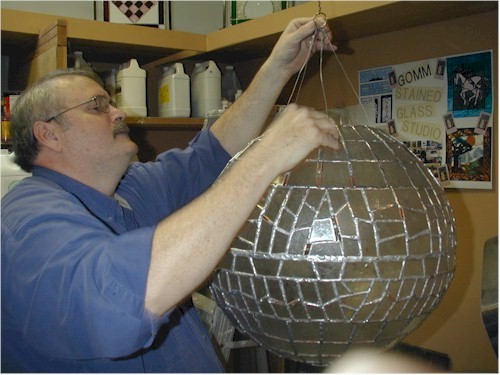